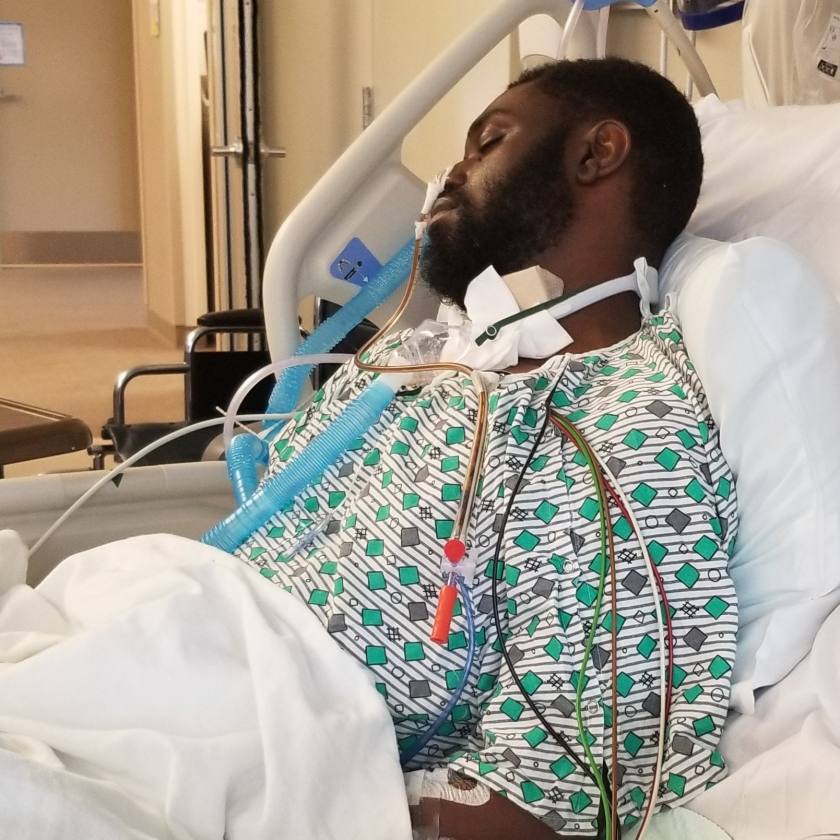 “It sure is. Now he just has to have tape over the hole until it closes.”

That was the response text I received from my oldest son’s girlfriend Nikki this morning, when I asked if the traech had been removed yet. It’s been 3 weeks and a day since Kenny Jr. was rushed to the hospital in extreme pain and barely able to breathe as a result of an infection. He had lost consciousness once or twice, prior to getting medical attention.

He underwent emergency tracheotomy surgery and then was placed in the Intensive Care Unit with a host of tubes and monitoring devices which included the equipment designed to make breathing possible.

But this day was the worst. My son, my firstborn, had been rushed in with a life-threatening illness that brought our world and sanity to a screeching halt.

By the time we got there, he was out of surgery and his girlfriend had swapped places with us so we could visit his room. Still in the midst of the COVID pandemic, our hospital had established and maintained the highest levels of control, despite the opening of many businesses and removal of restrictions. I’m still in disagreement about that, but hey, it’s the country’s decision, not mine. As a result of their protocols, every visitor had to check in and be temperature-screened in the hospital entrance and only one person was allowed beyond that point to his unit at a time.

By the time I reached his room, he was asleep and recovering. I was told that if you said his name loud enough or jostled him, he would wake. But that was the last thing I’d intended to do. He needed his rest. I had been preparing for the moment by looking at the photo of him that his girlfriend had taken and shared with us. But it wasn’t enough. It would never be enough. When I got there and stood in his presence, it took on an entirely different feeling.

There was my son. My SON. Unconscious, or rather in a quasi-conscious state. The only sound being the beeping of the monitoring devices and the respirator that was helping him breathe. There lied my son, the beginning of the new generation of Davis kids as far as my sisters and brothers were concerned.

Helpless. Hurting. Dependent upon the creations of mankind on his path to recovery.

I softly gripped his ankle, so as not to wake him. I closed my eyes and began to pray, harder than I’d ever prayed in my life. Of course my words and my request is between me and God. Just understand that I called on Him like never before. It was during that time that I heard words that weren’t mine. A sensation that comforted that all things would come, in time. That it was His will and I was merely a spectator, instructed to lean on His promises and grace. And during this time, I lost control and I wept. Miserably, but trusting. I tried not to fear, but was overwhelmed by it. I was paralyzed by it.

It was my son.

I thought back on the dream I had when he was a little boy. A dream where I walked to an abandoned swimming pool in a public park, long since taken out of use. There were fallen leaves everywhere. The security fence bordering it was warped and nearly touching the ground from the top in various places. The diving board was broken, midway through. The concrete around the walking area was broken with shards of glass and miscellaneous trash strewn throughout.

And there, in the middle of the yellowish-brown water, about 3′ deep, was my son, floating in the pool; face down and lifeless.

I rushed into the water and pulled him out, knowing he was gone; beyond saving. I walked through the park, howling at the top of my lungs as his small body draped across my arms, legs and head hanging over like a towel.

I awoke in tears, running to his room, where he slept soundly. I quickly snatched him up and wept again in both joy and terror, having experienced a pain I had never known. As a result, I scared the life (for lack of a better word) out of him.

And now, here I was, looking at my son. My son. Who slept peacefully, avoiding the great discomfort that he would endure with each waking moment, unable to talk for the coming days. Unable to eat or drink. He hadn’t been able to physically swallow since being brought in and could not.

And when he would wake, he would be the only person not making a sound.

I remember, years ago, the day that my father told me, “a man should never have to bury his son”. Thank God this wasn’t the case here, but somehow I learned something new: No parent should have to see their child in the hospital. I know parents go through that scenario all of the time, from minor to tragic reasons. God bless them. But for us, for me, it was a first. And although I can’t imagine what it must be like for a parent to actually lose their child, I’d be lying if the fear of that thought didn’t give me a near heart attack.

Before leaving him to send my second son, Kevin, up in my place, I remember whispering, “I love you, Kenny J. I’ll see you when you wake. Be strong.” I cried again briefly as I exited the ICU and walked into the elevator, but quickly regained my composure before it reached the main floor.

Poor Kevin (son #2). He couldn’t bring himself to go. The thought of seeing his older brother was too much for him, as it would be for his youngest brother as well. The son in between the two was the only one to muster the strength to see him that day. Thankfully, they all managed to visit him during our subsequent daily visits throughout the week.

And though it got easier with each day, and although he and I would sit together, exchanging text messages for communication…

…even through the practical jokes…

It was my son.

Oh, let me talk about that. The practical jokes.

On my second day with him, we decided to talk a selfie to share with family and friends on social media to let them know that he was getting better. After we posed, I looked down to discover him with his eyes closes and his lips, contorted. I said his name twice before nudging him, beginning to worry that he had collapsed. Just as I turned to call for assistance, he looked up and smiled at me.

Yeah, he got me. I guess the apple doesn’t fall far from the tree when it comes to the pranks. If he wasn’t so bad off, I would have jiggled his catheter in a vengeful and maniacal act.

Because of the surgery and pressure on his vocal cords, we had no idea when he’d be able to talk again (if ever, in some cases like that). By the time he had been moved out of the ICU to another room, we were establishing a pattern for communication and our visits. At least in his new room, he could have two visitors.

It was later in the week that my wife and I saw him at the end of the day. When we asked our staple question (How are you feeling today?) he looked at us and tilted his head sadly. We asked what was wrong and he promptly put his hands over his throat and blurted, “I can HEAR! I can TALLLLLK!!!” (If you didn’t see “Stephen King’s The Stand”, you wouldn’t have gotten the joke.

Short version, Rob Lowe’s character, Nick Andros, who was deaf and unable to talk, had a dream where he received the abilities, causing him to scream out in jubilation. But I got the joke, as Kenny J knew I would.) His mother and I screamed and immediately hugged him joyfully, yet with caution.

His speech had returned without warning, earlier that day, when a nurse asked him a question and he unexpectedly answered with sound. It shocked him as much as them. He figured he’d have fun with that later on me/us.

Unfortunately, they had already removed his catheter. He’ll never know how close he came.

Well, here we are today. He’s been home for several days and just left he doctor’s office, finally having the traech removed. And everyone is relieved.

We had just spent the evening with him last night, watching a movie. The night before, we visited for Fight Night. And now, I’m looking forward to seeing him, more than ever.

You see, that’s my son. No, I don’t love him any more than my other three boys, but he was the first. Not too long after his birth, my wife relocated from Tallahassee to Brunswick, Georgia for a job promotion, leaving him with me for two months as we got our affairs in order. It was during this time that I bonded with him as a baby. He is my father’s first grandson, born on my father’s birthday.

That’s my son. And he’s been through the most traumatic experience of his life (of which, I spared you many of the sordid details).

For the first time, where my children are concerned, I was completely powerless, or should I say, useless. As a father, I could do nothing but pray (and worry incessantly).

As a father, your children look to you to be superman, as I did mine. But this time, I was nothing. I can only hope that through it all, I was a source of comfort when he needed it most.

That’s my son and I love him more than my own life. As a young man, he is very headstrong and stubborn like me. As a result, there are times when we won’t see eye to eye. More often than not, because he continues to assert himself as a man, which is something I need to let him do, freely and uninterrupted. Serving only in an advisory capacity, should he need me. But one thing he definitely knows. I will always be there for him and would die for him without hesitation. It’s the way of a loving and caring father.

And although the worst is behind us, I will never forget my greatest living nightmare since I became a father.

And I don’t care how old they get. They will always be my babies…

…and I’ll do everything within my power to protect them.