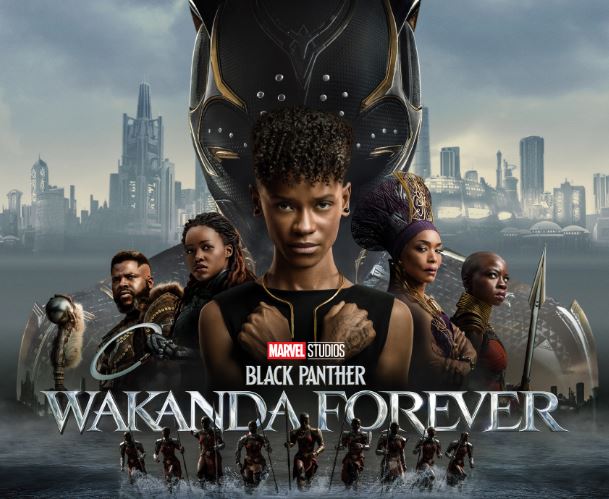 Welcome back everyone! If I was a betting man, I’d put it all on the fact that 9 out of 10 of you readers have already read 10 Issues We Can’t Ignore About Black Panther and Wakanda Forever (Pt. 1 of 2). If you haven’t, feel free to click on that link. Part 1 covers points from the first movie, “Black Panther”, with the understanding that many have or had not yet seen the sequel.

And now, for Part 2, focusing strictly on “Black Panther 2: Wakanda Forever” (remember, these are major spoilers as I am discussing critical phrases and plot points).

I’m sure everyone knows by now that our beloved star of Black Panther, Chadwick Boseman, passed away after the release of the first movie. Although he contributed to the recent Avengers movies and the Marvel “What If” mini-series, we lost him before they could begin work on this film which depended heavily on his presence.

Thankfully, Director Ryan Coogler, despite his grief and initial hesitance to do so, decided to continue with a story revolving around the Wakandan nation moving on in the wake of such a devastating tragedy. We appreciate you, Ryan…

That being said, let’s get to it shall we? Please remember that just like in Part 1, these are my opinions and not a critique of the two projects. They are talking points you may or may not have noticed.

One other thing. I’ve only seen it once. I might be inaccurate with a scene description or quote, so please forgive me in advance. I’m getting old and my memory is as long as my hair.

Before I begin, let me add a point that I intentionally omitted from Part 1:

It was wrong of Killmonger to destroy the entire crop of heart-shaped herbs.
If you remember in “Black Panther”, Killmonger, having ingested the heart-shaped herbs and receiving the power of the Black Panther, instructs that the remainder of the crop be destroyed. I don’t know if this was fueled by hubris, greed or straight stupidity. Even if he did not want to be replaced by anyone else during his lifetime, he had to know that he would not live forever. If he wanted an heir to the throne, a chosen replacement or posthumous selection to rule with the power of the panther, he needed to leave that resource intact.

I suppose he didn’t want to relinquish his power at any given point going forth, which meant “Challenge Day” was canceled, permanently. We can probably chalk that up to his ignorance of tradition. Still, I think he just wanted to rule until the very end. Damn the future.

I kept this out of my previous blog post because as you know by now, not having the herbs made it impossible for Shuri to save T’Challa in the opening scenes of “Wakanda Forever”, which sets the tone for the entire story.

Now we can begin…

1. The world leaders should be asking for assistance instead of making demands for Vibranium.
Near the beginning of the movie, we find the Sovereign Queen Mother Ramonda standing before the world council. During this meeting, several representatives reprimand Wakanda for keeping their healthy vibranium supply a secret from the world and demand that it be shared.

Ramonda explains why it was kept a secret and what the countries of the world would do to get it in addition to what they would do WITH it. She strengthens her position by having members of the Dora Milaje fighting force bring in captured operatives who recently invaded Wakanda in an attempt to procure it illegally. Mic drop, Ramonda. Go ‘head, baby.

I’m sure there was a better way to approach this issue and come to an agreement as to how vibranium could be issued and used. But in the end, we all know mankind’s way. Make war, not love…

2. King Namor’s decision to kill Riri was not necessary.
Namor’s understanding is that field operatives attempted to extract vibranium from a potential source underwater, near his domain. In a joint effort between the CIA and Navy Seals, a newly developed vibranium-detection device was used in the Atlantic Ocean to find it. He later demands that Queen Ramona and Shuri bring him the scientist who created it, as he intends to kill him/her. He adds that failure to do so would result in an attack on Wakanda by his people.

When MIT student inventor Riri Williams developed the technology for vibranium detection, she had no idea that the government would use it for their own means. In fact, she was unaware that her work (or patent) had been taken (sounds like when the government took Harry Stampers drill designs to NASA without his knowledge or consent in “Armageddon”). Killing her would not stop the government from continuing the use of their new equipment. Her role in the process was complete before she even knew she was a participant.

3. Queen Mother Ramonda did not have to strip Okoye of her station.
When Dora Milaje General Okoye requests that Shuri accompany her on her trip to meet Riri and bring her to Wakanda, plans go awry when they find themselves pursued by the FBI. They soon encounter super powered warriors with vibranium suits from Talokan, sent by Namor. Facing several of them alone, Okoye holds her own for a short period of time before being bested by the warrior leader. The team kidnaps Shuri and Riri, taking them to their underwater home while Okoye is left to return and report the mission’s failure to the Wakandan council.

Refusing to accept Okoye’s defeat and request to attempt a rescue, Ramonda chastises her for a number of her decisions, including Okoye’s choice to remain loyal to the throne (in Black Panther) when Killmonger bests T’Challa during the challenge combat ritual (which also results in her lover W’kabi’s imprisonment) and taking Shuri on such a dangerous mission, despite Ramona’s prior discouragement. Ramona strips Okoye of her title as general, despite Okoye’s pleas and declarations of loyalty and resolve. Ramonda later seeks out Wakandan War Dog Nakia in Haiti, asking that she retrieve the captives.

There is no greater warrior in Wakanda than Okoye. She lost the initial confrontation with the warriors because she was outnumbered and overpowered. Still, her fight was impressive. In her loyalty, she would gladly have died to protect them. In my opinion, Ramonda’s decision was harsh and unfair. If anything, she should have sent Okoye back with assistance, including Nakia in the effort. Not that Nakia didn’t succeed in her rescue mission, but it was a different scenario. She entered Talokan undetected, using the element of surprise to make the rescue and escape. Okoye was the correct choice for the mission, and she should have been given an opportunity to redeem herself, rather than relent and exit the throne room in shame.

4. Shuri should remain the Black Panther, but not the ruler of Wakanda.
Since the first movie, Shuri continues to display a level of maturity and disrespect for the throne.

She was even referred to by Mountain Tribe leader M’Baku as “a child, who scoffs at tradition” during the challenge ceremony.

When imbued with the power of the Black Panther, Shuri makes it clear that she wants only revenge for the attack on Wakanda and the heroic death of her mother. She is so consumed by rage that she cannot understand and accept that her visit to the Ancestral Plane unexpectedly resulted in a meeting with Killmonger. This alone is enough to show that her intentions are not noble, especially when he encourages her to ‘handle her business’. It is not until a vision of her mother appears to her in the final battle that she realizes that she is on the wrong path.

Shuri is not known for diplomacy and is ill-equipped to make decisions for the Wakandan nation. I’m sure that she would evolve and someday become a great leader, but now is not the time.

I know that in Marvel Comics, Shuri eventually becomes Black Panther, but I’m still trying to figure out when and how she received the training. The power comes from the herb and invulnerability comes from the suit, but the fighting prowess that she displayed in the battles in the movie takes years of dedicated training. T’Challa was trained as a warrior from childhood, but Shuri is a mastermind and arguably the smartest person on the planet (as reported). But I digress. She has proven that she is able to handle the mantle as protector of Wakanda.

But let’s be honest, when they strip that power on Challenge Day, it might not end well for her.

5. M’Baku is probably the best candidate for ruler of Wakanda… …at this time.
The film ends with M’Baku’s surprise arrival on Challenge Day, stating that Shuri is tending to other matters and that he would like to throw his hat in the ring to become the new leader of Wakanda.

Throughout both movies, M’Baku has shown that he is more than just mindless muscle (remember him deadlifting a member of the Border Tribe with his weaker hand?). He is a caring leader. He protects T’Challa’s dying body after it was thrown from the waterfall. He judges the battle fairly and reasonably. He pledges to protect Ramonda during the final battle. He also arrives to save the day when all appears to be lost.

You might also remember his brief, but cool-ass charge amidst the world’s warriors in the big battle in “Avengers: Endgame” against Thanos and his troops.

In Wakanda Forever, during the attack on Wakanda, M’Baku selflessly dives into the water to save the citizens while preparing to battle the invaders. His fearlessness is also displayed during the climactic battle.

His other heroic, but silent moments involve his calming conversation with Shuri before the fight as he advises her accordingly.

I would follow him unquestioningly. Besides, to me, he is the only logical choice other than Nakia, who to me would be the greatest leader. But my baby is in Haiti.

And that’s it for Part 2!  Have something to add or a comment? Put it in the section below!  And be sure to sign up at the bottom for email notification of future posts from Kenny’s Camera, Cooking & Crazy Confessions at ZootsBlogSpot!