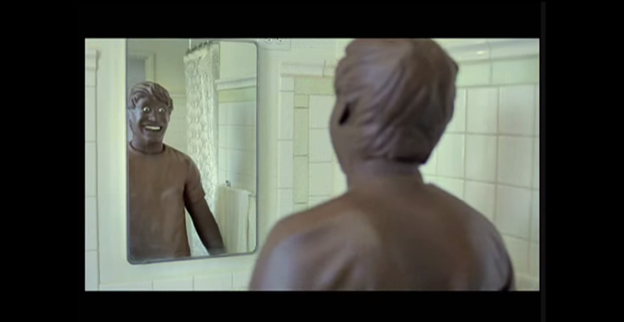 The people in line gasped with hands over mouths as I looked up from behind the Customer Service / Merchandise Pickup counter, past the customer facing me.  Standing off to the side, about 6 customers back was a 4- or 5-year-old little boy.  With his strawberry freckles and blonde hair, he looked comically like the old Dennis The Menace cartoon.  All he needed was the red bib overalls and that black & blue horizontally striped shirt.

It took me a second to register that he was referring to me, which was a no-brainer since I was the only person of color behind the counter.  In fact, no one else in line could claim that title.  So I was declared the winner.

“Hello little boy,” I replied kindly, trying to mask my desire to say something dramatically different.

“Helping customers and that is not my name,” I replied sternly but carefully, remembering my surroundings and more important, my job.  I glanced at Mr. Hicks, the Warehouse Manager, who breathed heavily through his nostrils, knowing damn well what I was capable of and what might be brewing.  The customers in line stared with wide eyes, seemingly holding their breath.  At least it appeared that way, considering how loud Mr. Hicks’ wheezing was.

“Boy, you suuuuure are CHOCOLATE!”

“Kenny, you wanna go on break?” Hicks asked nervously.  I could tell he was without options, but needed to create one in light of the situation.  Being the senior store associate after the Store Manager and Assistant Manager, he knew it was his responsibility to take the simmering pot off of the fire.  His solution was to simply remove me from the equation.

“Where are you parents, son?” I enunciated slowly, despite my clenched teeth.

“Why don’t you go over there?” I offered, pointing in the direction of the toys.

“OOOOOOHHHH!” he exclaimed excitedly as he ran straight for adjacent department.  But not before yelling goodbye to Mister Chocolate Man one last time.

I kept silent as I grabbed the ordered items off the conveyor belt and smiled as I thanked and handed it to the customer in front of us.  No one said a word.

“You know what? I think I WILL take that break now.” I accepted as I stacked the next 3 or 4 orders.

Hicks looked as if he wanted to rescind his earlier offer, but he knew as well as I did that he didn’t have a valid reason, especially since I was the only person who hadn’t been on break.  I always went last.

“Have a good lunch and be careful,” he half-warned.  I think everyone in line knew what he meant.  I’m sure they all believed I would go outside and walk it off with a smoke break.

But the path to the breakroom goes through the toy section.

And to use bad grammar, “Kenny don’t smoke…”

Sitting on the floor of one of the aisles, playing with the assorted G.I. Joe action figures, oblivious to the world around, or to be more specific, behind him, was Dennis The Menace.

“Hey kid!” I whispered, causing him to turn around to see the stereotypically angriest, blackest face I could produce.

Remember the rough bass voice of the apple trees that the Scarecrow tricked into throwing apples at him and Dorothy in “The Wizard Of Oz”?  Yeah, that voice.

I was right in thinking that the phone in the breakroom would ring by the time I started on my snack.  A co-worker got up to answer it as I scarfed down my ham & cheese sandwich, knowing the call was for me.  When she said my name I told her that my break wasn’t over.  I could have said that I was “on my way”, but that would have been an admission of guilt because nobody cuts their break short without good reason.  And yours truly had no idea why the phone was for him – or at least it was exhibited as such.  When she said I needed to come take the phone right then, I got up, visibly frustrated, walked over and took the phone.

“I need you to come back to Customer Pickup immediately” Hicks said firmly.

“On my way!” I replied reluctantly, yet convincingly.

When I arrived at my department, there was Mr. Hicks, my breaktime replacement, the Store Manager, Dennis the Menace, two red-faced adults and a longer line of curious customers.  A few in front had anxious smiles on their faces, having witnessed the earlier episode and heard the subsequent scream that emanated from the toy section and traveled to the jewelry department like a passing fire truck.

“Did you say something to this little boy?” the Store Manager asked accusingly.

“Why yes,” I replied energetically.  “We spoke before I went to break.  He said hello and asked me what I was doing.”

Obviously, my evasive truth was also a timely lie.

“You said something that spooked my son!” his father yelled, shaking a pointed finger.

“It’s funny you should say ‘spooked’ sir!” I quickly returned, silently thanking God for the perfect moment. “Your son came over here calling me ‘Mr. Chocolate Man’.  A line full of people and I’m the only black person back here.  Is there a reason he called me that?”

The newcomer customers gasped in shock, while the eye-witnesses moaned the collective “Mmmm-Hmmmm” of a vindicated wife, trapping her lying husband.

And of course, his wife’s expression was all that was needed to exonerate me.

You could pretty much hear the gavel on the block and “case dismissed” as she snatched her son and stormed away.  I couldn’t make out much of what she half-yelled through her partially closed lips, but I’m pretty sure I heard, “I told you to stop teaching him stuff like that…”

Her husband walked along and kept quiet.  Dennis The Menace stumbled as she walked faster, half-dragging him due to his inability to keep pace.  The entire time, he was looking back at me with a terrified look on his face as I politely and silently sent him on his way with love.

There was little the management team could do to me since no definitive complaint was made and no one actually knew what happened. I was later given a Verbal Warning for “Inappropriate Behavior” which made me lose zero sleep since I hated the Store Manager anyway.

But that’s another story.

This has been, another Retail Re-Tale, courtesy of Mr. Chocolate Man.